I’m a camera guy and I noticed that there’s an upcoming TEDxUCLA event. Well, like most TED events, I assume they would hire a camera crew to shoot that event. Out of curiosity, I simply asked, “Do you hire your camera crew or through a third party?” Instead I got, “we currently have a camera crew for 2016. But thanks for asking.” How does this answer my question? Why is this answer so hostile and unhelpful? 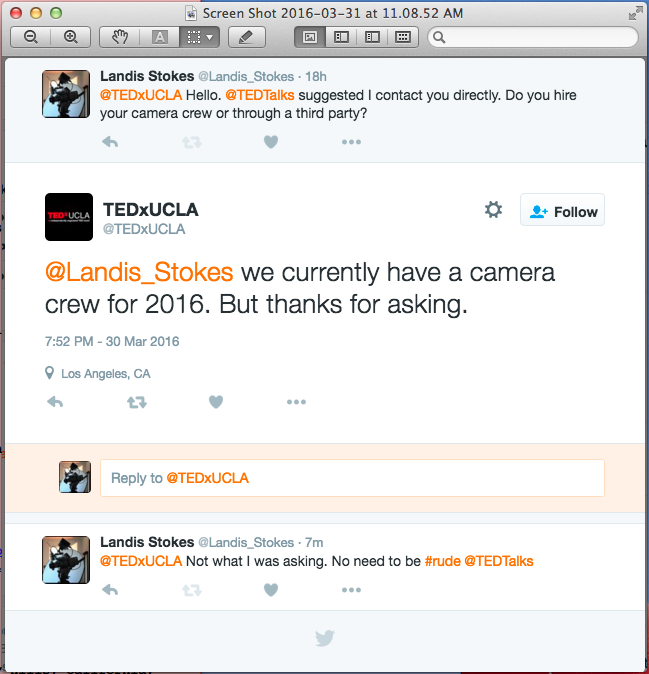 I love TED Talks. They’re inspiring, informative, and very entertaining. I see the brand and assume that everyone who stands behind that brand strives to promote an environment of curiosity, unpretentious wisdom, and camaraderie. Instead, I was given a curt, pretentious, and snobby response by TEDxUCLA.

Am I wrong for asking a question?

I single out TEDxUCLA because right before I contacted them, I reached out to TED directly. A site support rep sent a response that was friendly, professional, and informative.

Maybe that’s why TED defines the TEDx sites as “independently organized TED-like events around the world.” “TED-like,” but rude. That’s too bad.

Have I lost any sleep over this? (Lol) Of course not. It’s typical to my industry and I’ve gotten far worse responses to inquiries. I also know people who do this won’t get too far in anything.

What compelled me to speak up is that I really like the TED brand and think it’s a shame that their association with this experience has put a bad taste in my mouth.

On the bright side, it is a great lesson in public relations. Whether in person or on social media, people still care about how they are treated.

Maybe there’s a TED talk about it!

Probably not at UCLA though…

Have you had something similar happen to you? How did you react? Should brands be held responsible for rude behavior on social media affiliates? What is the appropriate reaction to a situation like this?

Please reply in our comments section.